skip to main | skip to sidebar

Hi Everyone. We picked up trash from all over the city on Sunday, and it is all installed on Governor's Island now ready for the weekend. I have uploaded a map. Its hard to see at this resolution, but the little yellow box in the upper left is our location: 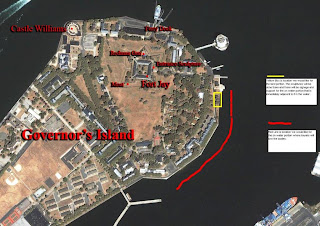 The oceans of the world are being choked in trash discarded by careless people. This exhibit is designed to raise awareness about trash in the sea with a disturbing and stimulating sight of floating bodies along with piles of trash that was actually removed from the water. There will be two distinct components to the work.

Trash recovered from the harbor will be incorporated into ad-hoc, impromptu sculpture exhibits by the artists. The general public will be encouraged to make their own sculptures or add to the existing sculptures. Through interacting with the trash, participants will relate to the items; through recognizing common consumer items that they have used throughout their lives, they will realize their possible role in contributing to the trash in local waterways and, by extension, consider their responsibility as consumers to limit their contribution to this problem.

Assorted trash removed from the ocean will be available for the sculptures. All items will be safe for people to handle. Trash will be made free of sharp items, food items, and unhygienic materials. Most trash brought in for the piece will be plastic or foam in origin such as bottles, toys, ropes, buoys, and shoes. A huge amount of strange objects can be found on a casual beachwalk. A recent beach trash performance featured a mobile made from a duck decoy body, with a doll’s head and arms, suspended by rope from a lobster pot, with a pendant made from a child’s game. (see picture).

All of the artwork will be created from actual trash found in the ocean and brought to the island. At the end of the performance all of the trash will be removed to be buried in landfills.

A floating community of bodies will be towed by kayaks in the water, the bodies can be viewed from the walkway/bikepath that surrounds the island.

The bodies will consist of discarded clothes that are stuffed with floating trash and objects collected from the . Everything in the exhibit will be made from trash. Unfortunately there are beaches all around the city that are overflowing with plastic bottles, Styrofoam floats, crab trap buoys, flip flops, etc etc…

The bodies will be tightly sown shut, with just a 2-liter bottle or Lobster Float for a head. No new trash will be introduced to the water and at the end of the exhibit all of the bodies will be interred in a landfill in a non-denominational ceremony.

Volunteer expert kayakers will tow the bodies around. Nothing will be anchored or left to drift in the water. A certified professional kayak guide will be on hand at all times to supervise.

Tim Gamble
I love being out on the water, so I decided to start releasing messages in bottles. I release one when I can, usually when kayaking or diving. I recycle bottles that I find as litter on the beach. I usually put a dollar in the bottle to attract attention, in the hopes that someone will pick it up. I am fascinated by beachcoming. I have found some pretty cool stuff over the years. The more I look through trash on the beach I have started picking-up more and more. Not just the good stuff, but just regular trash. The amount of trash humans have put in the ocean is really frightening. See the article in links section below. I started adding the "Truth" section after getting comments from people that my blog was too boring. One person suggested poetry, but I went with a suggestion from another friend that I add an "irrefutable truth". I have tried to do that. Sometimes it's stupid, sometimes profound, sometimes personal, sometimes just something that pops into my head.